Earlier this month, I spent 3 days in Rome with my good Swedish friend, Kajsa. As anyone would be, we were ecstatic at what our weekend would hold.

It got off to a bit of a rocky start. We flew out of Paris Beauvais, so we had to take a train from Poitiers to Paris, and then another train from Paris to Beauvais. (Beauvais is on the outskirts of Paris and took about 4 hours by train to get there.) We knew we would have to spend the night in Beauvais to catch our 7:30am flight, so we booked a B&B to stay at near the airport. After explaining our plans to our host via email, she was kind enough to send us a map of her home and how we would be getting to the airport. (Unfortunately, the map didn’t include the train station.) We didn’t realize the train station was about 45 minutes away from her home AND the airport, and at 11:00pm, we were lost with no wifi or maps to help! We stepped outside the train station and noticed a bus stop, so we caught the last bus running that evening (so lucky!), and the driver ensured us we would get to the airport. From the airport, we knew how to find the B&B. I’ve always told people that “when you travel with me, it’s more of an adventure”. This was definitely an adventure! Complete with pitch darkness and enough fog to film a horror movie, the environment wasn’t exactly ideal for 11:30pm in an unfamiliar town.

Arriving much later than we expected, we got settled into our B&B and got a couple hours of sleep before heading to the airport. After checking in and going through security, we had to find our gate (which was easy, because there were only 4), and waited for our flight to board. This was my first time flying within Europe, and I’m not sure if this is common everywhere, but I noticed it in Rome too… airports are confusing! There were no signs at the gate saying “Rome Flight 8987”, or really help of any kind. It was nearly impossible to find an employee to help, so we followed the crowd since our flight seemed to be the only one leaving that morning. Another fun fact about airports, there is very limited seating. There were maybe 20 chairs for the 100+ people on our flight. Something that this American isn’t used to. Also, don’t expect to plug in your phone or iPad while you’re waiting, unless you’d like to pay. There are no outlets or charging docks next to the seats. There is a charging station where you can plug your phone in, but you have to pay by the half-hour. (Man, Americans really are spoiled!).

Waiting for our flight, and hoping we were in the right place, we started talking about how unorganized it was and heard a voice behind us say, “Hey, you speak English!”. (I’ve noticed here, that if I hear someone around me speaking English, I almost assume that I know them since it seems I know every English speaking person in Poitiers!) I turned around to see two relieved Americans! Lauren and Tiffany are from Ohio and were studying in Paris for a week. They decided to travel to Rome and Barcelona before heading back to the states. After talking with them for about three minutes, we knew these girls were fun! We spent the reminder of our waiting time chatting with them in the terminal, and they joined us on our 40 minute bus ride from the Rome airport to the Termini station (near our hostels). We even reunited for a glass of wine one night while we were there! They are two amazing women, enjoying Europe as well! Everyone’s heard the expression “what a small world”, here comes another story: While talking with Tiffany and Lauren, I mentioned something about ‘when I lived in Alaska’, and got the usual “wow that’s amazing!” response. Tiffany mentioned she knew someone in Alaska and when I asked what city they were in, she said to herself “Ughh, what city did Jamie live in?” *Click* I knew her friend Jamie, in fact, I had actually been to Ohio and met Jamie’s friends and family. Now, I meet another one of his friends, but this time in Europe! The ‘small world’ theory is proven again!

Once we arrived in Rome, we took a Terravision shuttle from the Campino airport to Termini station. This was about a 40 minute ride which gave us the opportunity to see the city of Rome right from the start! We weren’t exactly “thrilled” when we arrive at Termini. Although we were very excited to be in Rome, it seemed that Termini wasn’t the best place to be dropped off. There were many crowds of people and the area was quite dirty, so we quickly made our way to the hostel and settled in. We stayed at the Four Seasons Hostel in Rome and I recommend it to everyone! Great value, clean, and a very nice impression of what’s ahead of me in my future travels!

In efforts to change our first impressions of our surroundings, we left our hostel in route to the Colosseum. After walking for only five minutes, we found ourselves much happier with our surroundings, and only a few blocks away from the Colosseum. Kajsa and I enjoyed the beautiful views of Rome slowly walking down the streets, with no map, and no place to be at any certain time. We had deep conversation while taking in the architecture and beauty of Rome. It was one of my favorite moments and a really great end to our first day in Italy! 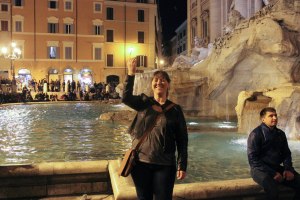 Making a wish at the Trevi Fountain

While in Rome, we saw the Colosseum, the Vatican, the Trevi fountain, and  the Spanish steps & shopping district. The weather was beautiful! It was in the 60s and 70s, and the sun was shining which was a nice change from the rain in Poitiers! We took the opportunity to do some shopping in the local markets and I got myself a genuine Italian leather purse (note: the terms genuine and leather are used very loosely), as well as a turquoise ring I fell in love with. 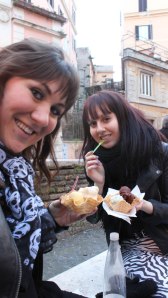 Kajsa and I agreed that the food was our favorite part of Rome. We ate a ton of pizza, even more pasta, and so much gelato, I’m still not sure how we managed to fit into our clothes by the end of the trip! The food was ridiculous! The ingredients were all so fresh and full of flavor is was difficult to leave any on your plate no matter how full you were! Italy definitely knows what they’re doing when it comes to food!

We also met some amazing people on our trip. We shared a room at the hostel with Cory and Yvette from Australia. They are cousins, touring Europe together for a month. We shared a lot of laughs and made some truly great friends. Coincidently, they happen to be in Amsterdam the same time I am, so we will meet up again there! We also met some Spanish police from Barcelona that were definitely loving their time in Rome! They didn’t know much English, but they had the words “party” and “vodka” memorized! It was fun to really use my Spanish with them and translate the hilarious things they were saying!

On our last night in Rome, we spent some time with our Canadian friends we go to school with in Poitiers. The five guys did a tour of Italy and landed in Rome about 12 hours before we had to leave. This was not planned. It just so happened they would be in Italy the same time as us! We made the time count and spent the night talking & laughing in our hostel over a few cartons of wine (yes, cartons).

Follow this link to see all the pictures from my trip! https://thetwentysomethingtraveler.shutterfly.com/ 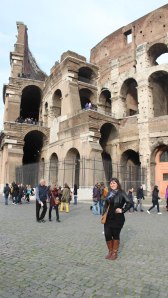 Once the travel bug bites there is no antidote, and I know that I shall be happily infected until the end of my life.