My most recent travel has taken me to Amsterdam, Netherlands and Copenhagen, Denmark. This was the first trip I booked when I started studying abroad. Katie, Alex and I booked this trip in late January so we’ve been waiting for it to come for about two months. Although Katie, Alex, and I were the only original travelers, we had some friends who tagged along in Amsterdam, as well as other friends who met up with us in Copenhagen. I’ve found that many of the trips I have booked with one or two other people, have now turned into groups of 7-12 travelers accompanying us. It’s great being able to travel with so many people!

After taking the train to Paris, (which we have to do for almost all of our trips), we took an overnight bus to Amsterdam. We arrived at our hostel around 7:00am and relaxed in the lounge until breakfast was available. We stayed at St. Christopher’s Winston and I highly recommend it to anyone traveling to Amsterdam. It’s a younger crowd, but a lot of fun with a great lounge area. Because we couldn’t check-in until 2:00pm, we put our bags in a storage locker and headed out to explore the town after breakfast. We joined the free walking tour of the city at 11:00am and after about 45 minutes of standing in the freezing rain, these tired girls were ready for another coffee! We skipped out of the tour and headed to a place called Crepes & Waffles, which quickly became one of our favorite places in Amsterdam.

When 2:00pm finally approached, we made our way back to the hostel for a much-needed nap. The little sleep we did get on the bus, was frequently interrupted and uncomfortable so we were happy to lay our bodies horizontal in our temporary bed at St. Christopher’s. After a nap, a shower, and food, we were as ready as we could be for whatever Amsterdam had in store for us! We ended up walking around and exploring the town which was much more beautiful when it wasn’t raining! We met up with my Australian friends Cory and Yvette, who I met in Rome a few weeks earlier. We toured the streets and walked through the famous Red Light District.

On our second day in Amsterdam, we headed to the Anne Frank house/museum and spent a few hours walking through the house and hiding place that’s known so well throughout the world. It was very heart wrenching to be where so much tragedy took place. After the Anne Frank house, we had lunch, then met up with some of our friends at the “iamsterdam” sign. From there, we strolled along the even nicer part of Amsterdam, taking pictures and window shopping. 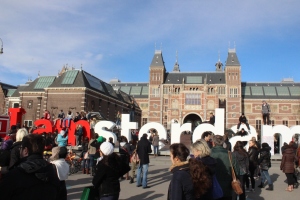 Our hostel was in a really convenient part of town and just a block away from the bar district. We joined in on a pub crawl that night which took us to six different bars within walking distance. It started out nice, but we found that the bars got smaller and more expensive as time went on. After leaving the 4th bar and on our way to the 5th, we passed Crepes & Waffles. Katie, Alex and I decided we would have more fun there than at the next bar, so we said goodbye to our friends and ended the night with some delicious food!

On our third and final day in Amsterdam, we went out to a nice brunch and spent the rest of the day shopping and getting souvenirs. Amsterdam was much more than I expected. For the reputation it has, I presumed it would be much more touristy and dirty, but I was happily surprised to find it as one of the prettiest places I’ve been to yet! I would recommend to go there if you have the chance, and hope I’ll get to return someday as well.

From Amsterdam, we flew two hours to Copenhagen. I will say that both Amsterdam and Copenhagen have really awesome airports. I was very impressed, and a bit relieved, to see it was much bigger and organized than prior airports I had traveled to in Europe! Both of these airports had a lot of options for food, as well as shopping. I’m talking full on grocery stores, H&M’s, Pandora’s, etc. in addition to all the people watching, (which is probably my favorite thing to do in airports).

Upon arriving in Copenhagen, we headed straight for our hostel. Nina and Keya, who we met up with in Amsterdam, also joined us in coming to Copenhagen, and we met up with Kajsa, Michael, and Gloria at the Downtown Copenhagen Hostel so our group grew from three to eight! After settling into our hostel, we went exploring for a few hours. We knew from our journey from the airport to the hostel that Copenhagen was beautiful and had great shopping! It was very quaint, the buildings were colorful and the streets filled with bicycles. The housing architecture and bicycle transportation were very similar to Amsterdam, but there was a much bigger ‘city-feel’ to Copenhagen, lots of shopping and restaurants. Venturing out after dark was fun in a larger city with lots of people and things to do. I was very excited to see a 7-Eleven, a taste of home I’ve missed. (Although after some investigation, I learned they do not have slurpees!) We finished off the night back the Downtown Copenhagen Hostel which has a great common area; live band, bar, coffee bar, foosball, board games, etc. It’s a great place to hang out and meet fellow travelers.

The next day was our only full day in Copenhagen. We didn’t realize how little time we had devoted to Denmark, but it turned out to be fine. Although the city was beautiful and there were more things we could have done, it was very expensive (specifically to eat), so we were okay with only spending a little bit of time there. Let me put ‘expensive’ into perspective for you: when we went out to dinner, at a mediocre restaurant, the bowl of chili my friend ordered for dinner was $28.00, and my nachos were $21.00! I think you can tell from the menu items, nachos and chili, that this place was no suit & tie establishment! Being in the 50s, it was cool outside, but many of the restaurants had outdoor seating and every chair had a blanket. It was really cute and almost made you want to sit outside. Unfortunately, the wind and rain had other plans so we spent most of our time indoors.

We made the best of the good weather when we could by visiting a famous street with very colorful houses, as well as visiting Freetown Christiania. Christiania is its own town inside of Copenhagen. The government gave them the land, and they have their own law/rules, and even their own currency! After reading many reviews on TripAdvisor, we decided it was worth seeing and went for a look. We were cautioned that since they are their own town, they are free to do what they want. There is a board with rules posted as you enter, and if you choose to disobey these rules, the locals of Christiania have been known to attack travelers and throw them out. These rules included “Have Fun”, “No Photos”, “Buying and Selling Hash is Legal” and “No running because it causes panic”. Here, drugs are legal, and there are no standards. My friend described it as “what the world would look like if it ended”, and I think she summed it up perfectly! The streets were dirty, buildings were man-made out of all different materials (sheet metal, tire rubber, etc.), there was much graffiti, and everyone looked as if they hadn’t showered in a month. Although it might come off sounding horrible, I was glad we went. It was really interesting to see how a beautiful, upscale town like Copenhagen, has its own world inside it behind a wall that explains how running causes panic!

Walking back to the main street from Christiania, it started to rain so we took the opportunity to do some indoor shopping where it was dry and warm! Being a group of girls, all in our twenties, I’m sure you can understand how we managed to survive a few hours inside some stores, but I think you’ll be surprised to learn that our afternoon started at the Disney store with a Tea Party!

We are all still very much kids at heart so we couldn’t pass up the Disney store, in which we found the movie Frozen was playing, and there was a table and chairs set up (for five-year-olds) to have a tea party. Obviously, we took the chance to be children again and spent some time watching the award-winning animated movie. We spent the rest of the rainy day going from store-to-store mostly looking because everything was pretty pricy. We found some very cool shops though and enjoyed our time even though the weather was unpleasant.

Surrendering to the wind and rain, we returned to our hostel around 5:00pm and warmed up while everyone enjoyed the free wi-fi. As some hotels and hostels offer free breakfast, we learned that our hostel offered free dinner in order to help travelers with the prices of the town. We stayed in that night, ate some free spaghetti, and relaxed in the common room of the hostel again. (FYI: The hostel also offered a continental breakfast, the cheapest in town, costing you $12.00 USD.)

The coffee bar was one of my favorite things about the hostel. I really enjoyed having Chai Latte’s at night while enjoying the company around me. Chai has been something I’ve missed dearly from home and I was very happy knowing I could have it whenever I wanted in Copenhagen, (even if it did have a ridiculous price tag!)

Our weeklong trip was great! Amazing places with even better company made these six days very enjoyable! I would absolutely recommend everyone go to Amsterdam if they have the chance. It’s one of my favorite places, so far, for its beauty and architecture. Look at all my pictures from Amsterdam and Copenhagen here: https://thetwentysomethingtraveler.shutterfly.com/

I’ve spent a lot of time recently on buses, planes, and trains and speaking with my fellow travelers, we’ve all agreed that we feel we spend as much time traveling to the destination, as we do actually IN it! I’ve always been a good flyer and have no trouble in buses, cars, or trains, but I actually don’t mind the traveling part so much. It’s part of the journey and part of the story. Fortunately, I’ll have a lot of good stories at the end of these five months! (That are already 60% over!)

After returning home from Copenhagen, I spent one day (okay, 36 hours) in Poitiers before traveling again. I’ll tell you about my trip to Marrakech, Morocco in my next post! Stay tuned… 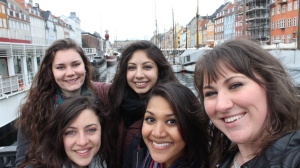 “We wander for distraction, but we travel for fulfillment” – Hilarie Belloc