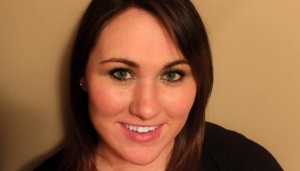 After graduating high school in 2006, I really had no idea what I wanted to do with my life. I was not the best student in high school academically, and I didn’t think college was for me. Neither of my parents went to college and they both continue to lead successful lives, so I figured I would follow in their footsteps… unfortunately, my generation doesn’t allow for that! Six months after high school graduation, I enrolled at Paul Mitchell the School Michigan and earned my license in Cosmetology. I started working as a stylist and quickly became manager of a salon in Macomb County. I was also a manager at a nightclub in Pontiac and learned that I loved managing and the business industry.

In January 2010, I went to visit a friend in Anchorage and fell completely in love with the idea of life in Alaska and the adventurous lifestyle that it purposed. I moved to Alaska in June 2010 and worked as a customer service representative in an insurance office doing secretarial work.  I met truly amazing people who I’m proud to call my best friends and experienced things I never imagined. I’ve witnessed the Northern Lights, watched the Official Start of the Iditarod (a few times), called in late to work because a moose was blocking my driveway, hiked a glacier, and waited 45 minutes to drive 2 miles on a one-way tunnel through a mountain. My year in Alaska taught me so much about life and living your dreams.

After one full year 4,000 miles away, I missed my family and returned home. It was at that time that I was able to start from scratch, but didn’t know what I wanted to do. At the age of 23, I found it extremely hard to get a job without a degree so I decided to enroll in college (something my mother thought would never happen!) . When I enrolled at Macomb Community College, I knew I loved the business industry and enjoyed my time as a manager. I registered as a Business Management major since that made the most sense. It wasn’t until my second year at MCC that I had to take a Marketing 101 course as a requirement for the management degree. I fell completely in love with the class, the topics, the coursework, the projects, everything! I wasn’t sure if it was because I had an AMAZING teacher (thanks Mr. Rice!), or because I really enjoyed the subject. I took a Global Marketing course the following semester to be sure, then officially changed my major to Business- Marketing.

I battled two major injuries (knee and ankle) while I was at Macomb which both required surgery, months of rehabilitation, and a lot of mental stability! Two and a half years later I still deal with daily pain and struggle to do certain activities. Although this information may seem irrelevant, there are actually two very good reasons I’m telling you this… The first, is the ability to overcome struggles in your life. My first injury occurred October 2011 and I was finally back to a normal lifestyle in March 2012. Two months later, in May 2012 I had my second injury. When I realized how serious my 2nd injury was, I was not only upset over the injury itself, but the frustration with being on crutches again after working so long and hard to get better. This feeling was worse than the injury itself. I spent 8 out of 13 months on crutches. During this time, I had to quit one of my part-time jobs as a cashier due to the fact that I couldn’t keep up with the physical demands. The second reason I’m telling you this is because not everything that seems bad is bad. I poured myself into my schoolwork because it was the only thing that kept me distracted from my injuries. It was the only thing I could do that allowed me to feel like I was getting something accomplished while on bed rest. From all my hard work, I finished my second year at Macomb with a 3.89 GPA and 75 credits.

I went to see my advisor about what classes I needed to take before transferring to a University. At that time, my advisor saw my progress and was very impressed with my success. He told me that with my grades, I would be able to get a lot of scholarships and shouldn’t sell myself short when thinking of universities to apply to. I left that meeting feeling enthused and motivated. At the age of 25, I applied to the University of Michigan-Flint with the encouragement of my family and was accepted… with scholarships! Although I received some funding, it was not enough to cover all of my tuition, so I continued to apply for other scholarships within the university and also FASFA (which is federal aid). I was awarded a few more scholarships, both inside and outside the university, and also money from the Pell Grant, which when combined, covers my entire tuition!

Throughout the past few years, my life has changed drastically. I shocked everyone when I enrolled in college. I shocked myself when I made the grades to get into UM-Flint, and I don’t think anyone was prepared when I found out I earned a full ride! Although my injuries seemed like a bad thing, in the end, it turned out to be a blessing in disguise. During my rehabilitation, school was the only thing that could make me feel like I was being productive. I was dedicated enough to earn good grades and responsible enough to keep them high throughout the semesters. I went from “the girl who was never going to college”, to studying abroad on full scholarships! The moral of this story is: Don’t give up! Always remember that everything is happening for a reason and believe that no matter what obstacles you face, it will all work out in the end. If you stay positive, good things will happen. You can truly do anything you set your mind to!

Since I am not living on campus, I was able to take the money that would’ve gone towards room & board, and apply it to something else school related. It was not a hard decision to study abroad. I have always loved traveling and adventure, and being able to mix that with going to school and earning credits seems like a dream!

My next adventure takes me to France where I’ll be from January 2014 – June 2014. I will be studying at France Business School in Poitiers and will earn an Advanced Certificate in International Marketing while abroad. I know I will experience more than imaginable during this six months, and can’t wait to see what Europe has in store for me!